Background: Even though attempted suicides represent the “tip of the iceberg,” they are slowly assuming the levels of a public health problem caused by several factors. We aimed to study the various clinical characteristics and gender differences among suicidal attempters.

Methods: A hospital-based cross-sectional study was conducted after taking ethical clearance. Data were collected from a tertiary care center at Bagalkot over the 6 months. The subjects who fulfilled the inclusion and exclusion criteria were evaluated by using semistructured pro forma, and various scales like Beck’s Depression Inventory (BDI), Beck’s Anxiety Inventory (BAI), and Beck’s Suicide Intent Scale (SIS) were applied. Relevant statistical tests were performed.

Results: Total number of study participants was 100 out of which 52% were females and 48% were males. The mean age of suicide attempters was 29.08 (SD = 11.601). Organophosphorus poisoning was the mode of attempt in 33% of the study subjects and 26% had severe depression.

Conclusion: Factors responsible for attempted suicides were young adults, female sex, low socioeconomic status, low education level, with marriage also being a potential one. Depression and anxiety are the psychiatric disorders associated strongly with a suicide attempt. Most of these factors can be either prevented or controlled.

Suicidal attempts are common problems, encountered in psychiatric clinics, and have become a cause of concern. “Attempted suicide is a self-injurious action with nonfatal outcome but with evidence suggestive enough of a person intended to kill oneself.”1 Suicide forms a major proportion of premature death globally. Every year, more than 8,00,000 end their lives and many more try to end their lives.2 It is a global phenomenon. It is the second leading cause of death among the age–group of 15–29 years.3 Seventy-five percent of the suicides occur in low- and middle-income countries in 2012.4

According to the National Crime Records Bureau data, an increase in suicide numbers from 110,851 in 2003 to 134,799 in 2013 has been recorded accounting 21.6% increase during the decade5 with the suicide rate being 18.5 per 1 lakh population in Karnataka in the year 2013.5 Suicide is a single problem influenced by multidimensional determinants. Sociodemographic characteristics along with clinical problems together form the major cause of suicidal attempts. Globally, suicidal attempts are more prevalent in women, whereas death by suicide is more common in men.2 People below 30 years are more vulnerable to commit suicide in India.6,7 Pesticide consumption is the most common method to commit suicide.8 The biggest problem faced in India is that behind one suicide, a large number of people tend to end their lives, making suicidal attempts a major risk factor for suicide in the population. This indicates the need to thoroughly examine patients with a history of suicide attempts to prevent further harmful consequences. Taking all these into considerations, this study was planned to assess the various sociodemographic factors, clinical characteristics in suicide attempters, and also to know the gender differences in patients with a history of suicide attempts.

The aims and objectives of the study were the following:

This prospective case series study was conducted among the patients with the history of suicide attempt admitted to a tertiary care hospital at Bagalkot over a period of 6 months from October 2018 till March 2019. A convenient sample size of 100 was considered for the study. The Institute’s Ethics Committee (Human Studies) had granted the ethical clearance. Before enrollment in the study, all study subjects had given the written informed consent in the local language.

The inclusion criteria applied in the case study are as follows:

The following factors are the exclusion criteria considered in this study:

The study population was recruited after considering the inclusion–exclusion criteria. The nature and the purpose of the study were explained to the study population as in the informed consent form. During the investigation time frame, every one of the participants was given standardized self-answering questionnaires as referenced underneath in the instruments utilized. Once the questionnaires were collected, the sample was subjected to statistical analysis.

Statistical analyses of the data were performed using IBM SPSS Statistics for Windows (trial version 20.0). Frequency and percentages were calculated for all qualitative measures. Quantitative measures were analyzed using mean and standard deviation. Chi-square test and Fisher’s exact test were used to analyze categorical values and check the association between two variables. A p-value of <0.05 is considered statistically significant. 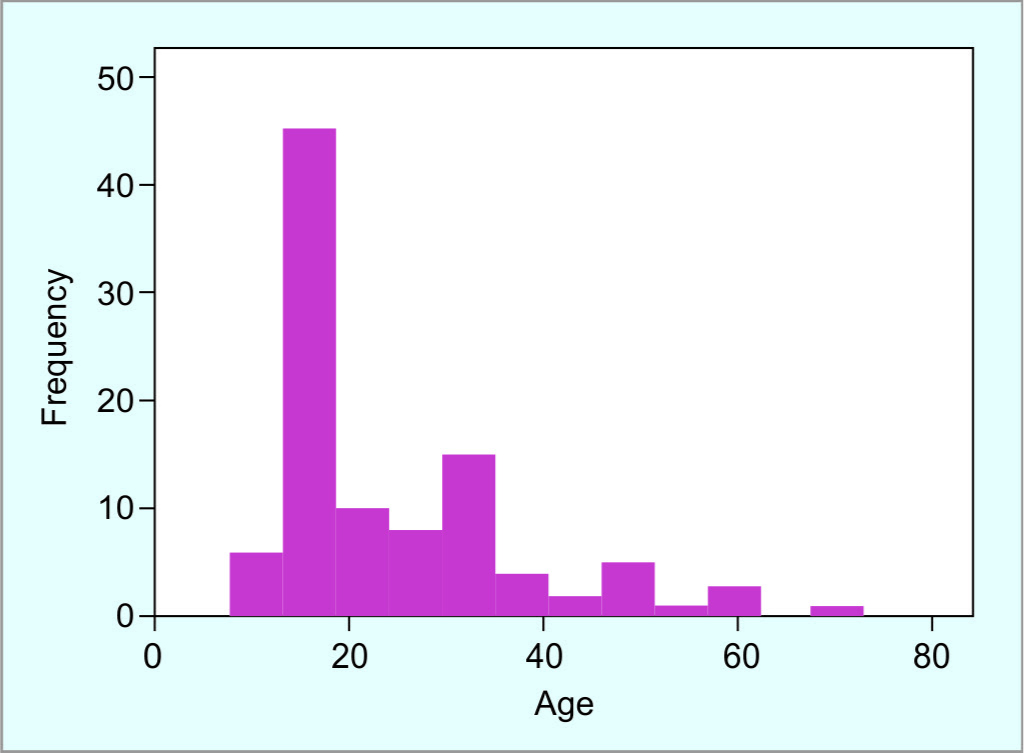 Fig. 1: Distribution of age of subjects 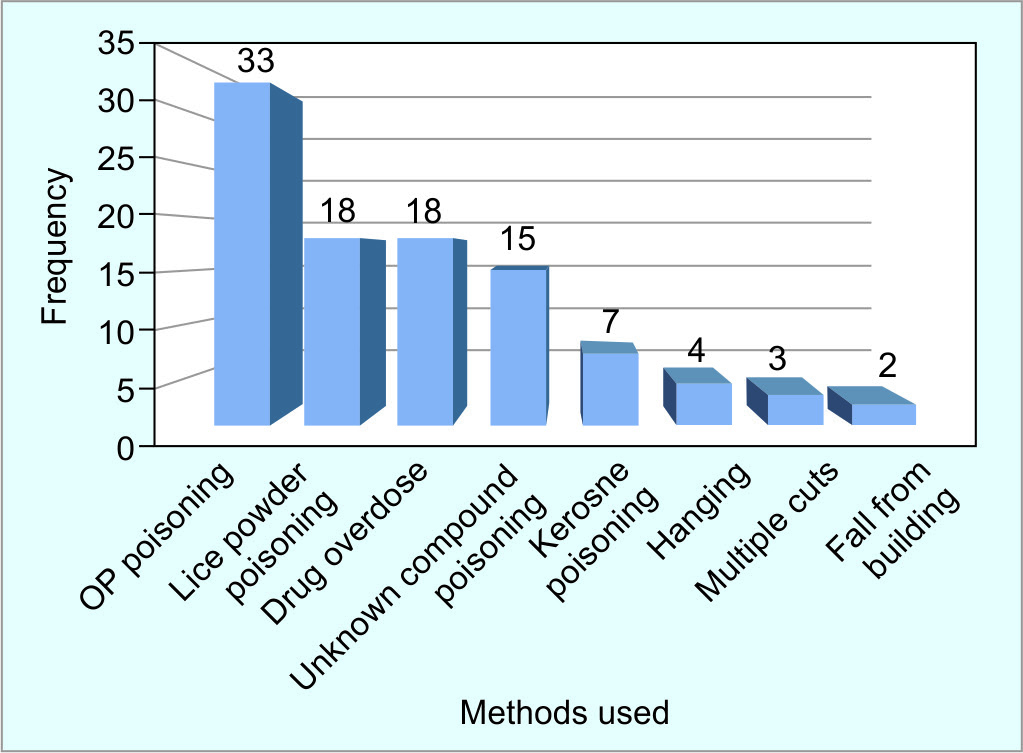 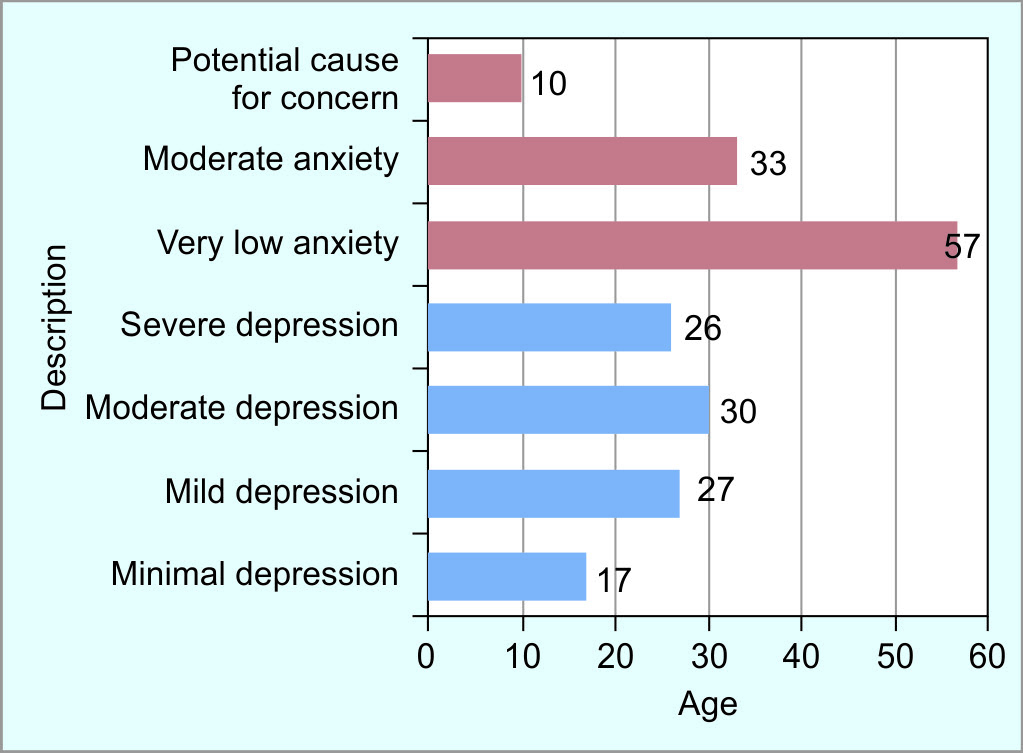 Fig. 3: Severity of anxiety and depression based on BAI and BDI

Through this study, we tried to find out the clinical characteristics and gender differences and their association with depression, anxiety, and suicide intent in suicide attempters. Peak occurrence of suicides was observed in the age group of 20–22 years, the youngest and the oldest being 16 and 72 years, respectively. These findings are corroborated by a study by Nukala et al.12

These findings confirm that attempted suicides are increasing rapidly among youths. The mean age of patients committing suicide was 29.08 (SD = 11.601). Similar observations were found in the study made by Krishna and Sheikh.13 Out of 100, 52% were females and 48% were males, similar results were found in the previous studies.14,20 On the contrary, male preponderance was seen in studies by Kodali and Kilaru.16,17,19 Most of the suicide attempters (76%) belonged to the below poverty line (BPL) (76%) and rural areas (60%), in accordance with the study made by Krishna and Sheikh.13 Most of the subjects in our study (55%) were educated only up to 10th standard which is corroborated by a study where a low educational status was found among 21% of the individuals and authors were of the opinion that it may have influenced the help-seeking and decision-making which could be an important risk factor for suicide attempt.21 Farmers (28%) and housewives (28%) form the major group of the subjects attempting suicide similar to a study by Baalasubramanian et al.22 and Nukala et al.12 The reason for farmers attempting suicide might be the agricultural background and rural population in the study and the socioeconomic issues faced by them in the developing world. Attempted suicides were more in married (60%) than in unmarried, similar to a study by Kodali and Kilaru19 suggesting marriage to be a less protective factor for females in suicide against males of the same age. Marriage is a strong cultural practice and a major social obligation in India, most of the deliberate self–harm patients were found to be married, which was similar to the findings of other Indian studies.17,18

The World Health Organization (WHO) reports that widowed, single, and divorced individuals are at a greater risk of attempting suicide than the married people. The cited reason was that marriage in India is a social commitment, which is performed by the elderly folks, regardless of the person’s readiness for it. Conjugal accomplices in India are basically aliens to one another (because of arranged marriages) as are the families. So, a few relationship issues could emerge among the wedded people.

The most common method of suicidal attempts was poisoning which was similar to various other studies.15,23,24

In our study, most of the patients were suffering from psychiatric disorders 30% of them suffering from moderate depression. Similar findings were reported in the previous studies by Chandrasekaran et al.,14 and Kodali and Kilaru,19 Bansal and Barman,23 and Das et al.25

Anxiety is not a causative factor for suicidal attempts in our study as 57% of the subjects have very low anxiety. On the contrary, the study by Sareen et al. suggests that anxiety plays a major role in suicidal attempts as the majority of the cases had at least one anxiety disorder in their study.26 Our study did not show any significant relation between the suicidal intent and the attempted suicide which was calculated by using Beck’s Suicide Intent Scale. On the contrary, a study conducted by Harriss et al. showed a significant relation between the variables.27

The result showing the association between the suicidal intent and depression was significant with 30% of the patients diagnosed with moderate depression. Similar results were found in the study conducted by Suominen et al. where results were significant.28 The association between the suicidal intent and anxiety was insignificant in our study as 57% of the subjects did not suffer from anxiety or any other anxiety disorders. Similar findings were reported by a study conducted by Placidi et al.29

The main limitation of this study is that it is a hospital-based cross-sectional study. Due to the social stigma associated with psychiatric disorders and suicidal attempts, people reporting to the hospital are far less than the actual count representing the tip of the iceberg of the actual problem prevalent in the society. The legislative measures taken against them on reporting further add to the problem of underreporting. The study also represents only a small population of the society so generalized results for a population cannot be interpreted through the study. More researches should be done on suicidal attempts concerning the limitations in the present study to know the actual scenario of the problem in the society. Community-based longitudinal studies are the need of the hour to reveal some more factors by avoiding the selection bias.

Suicidal attempts are the most serious issue of concern in the present world. Female preponderance, young adults are generally the target. A low socioeconomic group of rural backgrounds forms the major risk factor. Married young females are more prone to depression leading to suicidal attempts. Anxious people have less suicidal intent than the normal population. Pesticide and lice powder consumption is the most common method of suicidal attempt. The reason behind this could be the easy availability and agricultural background of the area. Suicide prevention is a multidisciplinary approach. Programs for suicide prevention should be implemented for the population at risk. Every year September 10 is observed as World Suicide Prevention Day to provide worldwide commitment and action to prevent suicides. Most of these factors can be either prevented or controlled. Early identification of suicide-prone individuals is the need of the hour so as to prevent and control suicides effectively.

Author's acknowledge the immense help from the scholars and authors of the articles cited. We would like to thank all the patients who became the part of the study. We are also grateful to the publishers and authors of the journals, books, from where the literature has been reviewed. We are thankful to our hospital authorities for permitting us to conduct this study.