Lunar Effect or Transylvania Effect: The Moon and Mind Connection

How to cite this article: Kakunje A. Lunar Effect or Transylvania Effect: The Moon and Mind Connection. Ind J Priv Psychiatry 2020;14(2):47–50.

The connection between the moon and human behavior has been there for centuries. The word ‘lunatic’ comes from the Latin word "Luna" meaning moon. The belief of moon influences mind is not only among the general public but also strong among health professionals. The lunar effect (i.e., lunacy increases during certain phases of the moon) is the connection between the lunar cycle and human behavior, and “Transylvania effect” is for those who discard the idea as a fancy thinking. Research evidence has not completely resolved the debate. Mental health providers should be aware of the beliefs revolving around moon and the mind. They should ensure that they are acquainted with the scientific evidence for and against such beliefs.

The connection between the moon, man, and behavior has been there for centuries. The word “lunatic” comes from the Latin word luna meaning moon. The word lunaticus, in Latin, was mainly denoting to epilepsy and madness, as these diseases were thought to be caused by the influence of moon. Roman goddess of the moon bore the name Luna. Earlier legislations related to mental health of several countries used the word lunacy in it.1 An 18th-century definition by Sir William Blackstone for lunatic was: “A lunatic, or non-compos mentis, is one who hath … lost the use of his reason and who hath lucid intervals, sometimes enjoying his senses and sometimes not; and that frequently depending upon the changes of the moon.”2 The Lunar Society of Birmingham used to meet on full moon nights in order to discuss literature, art, and science. It got it its name from the meeting dates as full moon nights made it easy for the attendees to return home.3

The belief of moon influencing mind is not only among the general public but also strong among health professionals.4 New moon, waxing crescent, first quarter, waxing gibbous, full, waning gibbous, last quarter, and waning crescent are eight phases of the moon, which follow one another at an interval of 3.69 days. The time required for the moon to return to the same position is the lunar synodic cycle. One lunar synodic cycle is the approximately 29.5 days.5 The “lunar effect” is the connection between the lunar cycle and human behavior where the belief is lunacy occurs/increases during certain phases of the moon. “Transylvania effect” is proposed by those who discard the idea as a fancy thinking.6

Since ages, a widespread belief is that the moon cycle affects the menstrual period. Traditional Chinese medicine believed that the human physiological rhythms display synergism with other natural rhythms. The cycle length of both these is roughly the same which has stimulated several studies on the topic. Moon is regarded to be related to fertility in humans and animals. However, systematic research on this topic has yielded contentious results.3 In a study by Bharati et al., frequency of births during various phases of lunar cycle found nil significance regardless of the route of delivery.7

The debate concerning the connection between lunar cycle and psychiatric illness has been an ongoing affair. (Fig. 1) Researchers have looked at various things like relationship between lunar cycle and psychiatric admissions or emergency department presentations, use of community psychiatry services, road accidents, violence, suicide, sleep, cardiac events, menstrual cycles, dog bites, fish reproduction, cataract surgery complications, stock market returns, and so on.8–12 According to Indian astrology, moon is one of the planets that can influence a person developing mental illness.13 Moon is even proposed to be of help in therapy.14 There are myths and beliefs related to supermoon too; it influences human behavior probably as an extension of lunar effect as moon is larger and closer during that time. Many people prefer surgeries and procedures related to the moon cycle. 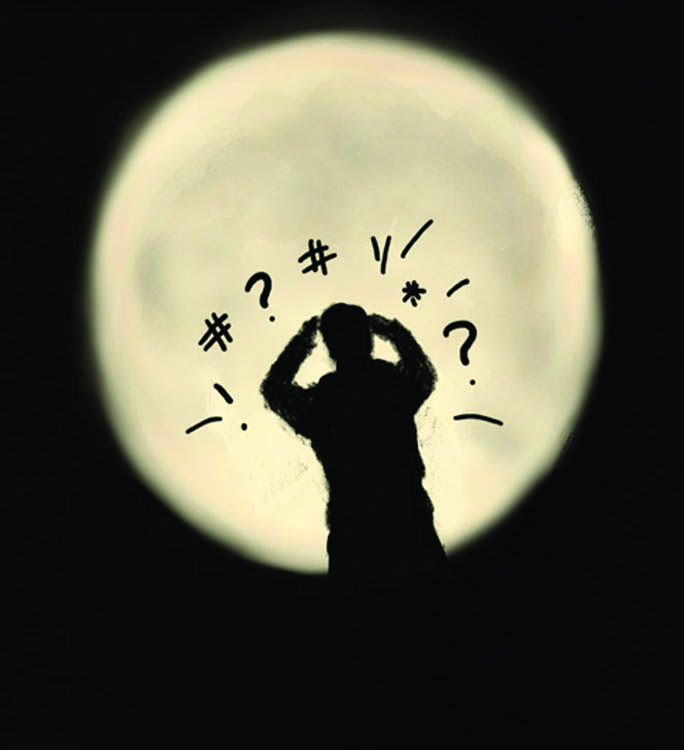 Greek philosopher Aristotle and Roman historian Pliny the elder proposed brain is wet and one of moistest organs in the human body and hence more vulnerable to the influences of the moon, which triggers the ocean tides. The belief is that as moon’s gravitational force influences the ocean waters, it can influence the brain activity too. The counterarguments are as follows: (1) The gravitational effect of the moon is a meager one to generate any effects on brain activity, let alone influencing human behavior; (2) the moon’s gravitational force affects only open bodies of water, such as oceans and lakes, but not contained sources of water, such as the human brain; and (3) the gravitational effect of the moon is same during all its phases.1

An observational analytic cohort study from the United States involved medical records of 1,857 patients who were more than 17 years recruited over 41 consecutive months. The study evaluated the number of persons seeking help from the hospital’s emergency department across all four phases of the lunar cycle. The data collected had 449 patients during the full moon, 483 patients presenting during the first quarter, 464 persons visiting during the new moon, and 461 presenting during the third quarter (Four-group overall χ2, p = 0.89). The differences between various diagnostic groups across the four lunar phases were not statistically significant. The study found that there was no effect of the lunar cycle on the incidence of psychiatric presentations or on the DSM-5 categories. Authors concluded that the lunar effect probably was too small or infrequent, making them difficult to validate it statistically.4 Study of medical records of 8,473 admissions done at Naval Medical Center San Diego from 1993 to 2001 was examined to see if there were higher rates of psychiatric admissions during particular phases of the moon, which revealed that various phases of the moon did not impact the admission rates. This was for the total psychiatric patients, as well as for persons with particular diagnoses, such as those with psychotic or mood disorder. Of the 1,909 emergency psychiatric evaluations between 2002 and 2003, they checked whether a higher number of patients presented to the hospital but did not need admission, during a particular phase of the moon. No significant effect was seen from this angle too.15 The routine clinical data and data about admission and discharges of 17,966 persons treated in an inpatient setting from Switzerland were analyzed by Rahul et al. The lunar cycles showed no connection with either admission or discharge rates of psychiatric inpatients, or with relationship of the length of stay.8 Kakunje et al. in a study from Manipal, India, looked at the lunar influence on psychiatry ward in-patients over 1-year period. The study aimed to see if there is an increase in mental disturbance during full moon and new moon period (a total of 3 days; the previous and next day included), by the use of extra medications (oral/injectables) over and above the usual treatment orders. This was compared with similar data on three middle days between full moon to new moon and new moon to the next full moon using lunar calendars. The total sample size was 800 with 8 months of retrospective chart review of medical records of 550 patients and 4 months of prospective analysis of 250 patients. The study found no significant change in the use of additional medications during new and full moon days compared to the middle days.16

Wehr et al. in 17 patients with rapid cycling bipolar mood disorder found that time-series analyses detected synchronies between mood cycles and three lunar cycles that modulate the amplitude of the moon’s semi-diurnal gravimetric tides.17 Barr et al. looked at mental health and quality of life of 100 mentally ill people in whom assessments were done on four different occasions over 30-month period. Their results showed a significant change in people diagnosed with schizophrenia during full moon days. Deterioration was noted in three areas of psychopathology and one area of quality of life in those with a diagnosis of schizophrenia (n = 56).18 Wang et al. from China evaluated 13,067 patients admitted to Zhumadian Psychiatric Hospital from January 2012 to December 2017 covering 73 lunar cycles. Lunar periodicity was seen for psychiatric admissions with schizophrenia diagnosis. They were stable in the new moon period, but their condition aggravated during the first quarter and full moon period.19 The objective of the study by Parameshwaran et al.20 was to see the relationship between full moon, new moon, and other moon days and the frequency of specific psychiatric disorder presentations in patients seen at a tertiary psychiatric hospital in Goa, India. They also examined the relationships with lunar and solar eclipses in two calendar years of 1993 and 1997. It was seen that a higher number of patients with a diagnosis of nonaffective psychoses were seen during full moon days. Andrade in his response to the article in Indian J Psychiatry opined that Parmeshwaran et al. studied patients at the time of admission and not at the time of onset or exacerbation of symptoms. Onset or exacerbation of symptoms happened before presentation to the hospital by weeks to months, and all that can be concluded from their data is that there appears to be an association between phases of the moon and the decision to present to psychiatric services.21 A study by Apoorva et al. from Manipal, India, aimed to study the relationship between lunar cycle phases and admission rates plus occurrence of sentinel events in the psychiatric ward of a tertiary care general hospital. A total of 780 admissions were studied over 1-year period. They found sentinel events such as the use of physical and chemical restraints in psychiatry in-patients significantly more common during the phases of new moon and full moon.5

A meta-analysis of relationship between phases of the moon with type of lunar cycle, involving 37 published and unpublished studies by Rotton and Kelly, concluded that the variance of activities, which was termed lunacy, had an effect size of less than 1%. The relationship between phases of the moon and behavior could be due to inappropriate methodology or statistical analyses.

They opined that researchers have not taken into account other cycles like weekly changes happening simultaneously, and there was a tendency to put any departure from chance as an evidence due to lunar effect.6

There is no standard definition for the lunar time period, and methodology varies across studies. The lunar gravitational pull and human expectation theory was rejected by a thesis study by Angus.22 Chudler after the examination of several studies opined that in the relationship between full moon and abnormal behavior, the engine that drives these beliefs appears to run on fumes.23

Climent24 inferred that there were methodological problems in earlier studies, which showed a lunar effect. However, the paper by Salvatore argued the claim that Type I errors could be the reason for positive empirical findings of “Transylvania Hypothesis.”25 Coles said there could be a qualitative behavioral difference during the lunar phases, not amounting to syndrome/disorders, which requires further study.26

On the one hand, we have a well-established belief in our culture and society that moon changes can affect humans, but on the other hand, it is considered as a myth by the rational scientific community because it has poor research evidence. There may be several reasons for why such belief is still strong among the masses. Raison and his colleagues termed the lunar lunacy effect as a “cultural fossil.”1

Moon has been mesmerizing and a mystery. People working in mental health should be aware of the beliefs revolving around moon and the mind. They should ensure that they are acquainted with the scientific evidence for and against such beliefs.