Behavioral and Psychological Symptoms of Dementia in Alzheimer’s Dementia: The Neuroimaging Correlates

Background: Behavioral and psychological symptoms of dementia (BPSD) is defined as “symptoms of disturbed perception, thought content, mood or behavior that frequently occur in patients with dementia.” Behavioral and psychological symptoms of dementia is associated with significant caregiver burden, early institutionalization, and rapid cognitive decline. The worldwide prevalence of dementia is 5–7%; whereas in India, it is reported to be 0.8–4%. Alzheimer’s dementia amounts to 60% of the total prevalence of dementia. We aim to study the neuroimaging correlates of BPSD in Alzheimer’s dementia.

Objective: To study the correlation between BPSD with white matter changes on neuroimaging in Alzheimer’s dementia.

Conclusion: Our study here in concordance with other studies worldwide gives a clue about the role of neuroimaging biomarkers in understanding BPSD in terms of its neuroimaging correlates and builds the scope of future studies in this domain. The study sheds light on the common presentation of BPSD, which adds to our knowledge in clinical assessment of Alzheimer’s disease (AD) patients. Finally, it also adds to our understanding of the role of sociodemographic factors in predicting the at risk population.

According to the International Classification of Diseases, Tenth Revision (ICD-10), dementia is a syndrome caused by the disease of the brain. It is usually of a chronic or progressive nature, with disturbance in multiple higher cortical functions, including memory, thinking, orientation, comprehension, calculation, learning capacity, language, and judgment. The worldwide prevalence of dementia is 5–7% which contributes to 4.1% of all disabilities adjusted life years.1 But in India it has been reported to vary from 0.8 to 4%. Of this, AD accounts for 60%, whereas vascular dementia accounts for ∼30% of the prevalence.2 It is estimated that the number of people living with dementia will almost double every 20 years, i.e., to 42.3 million in 2020 and 81.1 million in 2040. According to the International Psychogeriatric Association, behavioral and psychological symptoms of dementia (BPSD) is defined as “symptoms of disturbed perception, thought content, mood or behavior that frequently occur in patients with dementia”. The pathogenesis of BPSD has not been clearly delineated, but it is probably the result of a complex interplay of psychological, social, and biological factors. There is still debt in our understanding of BPSD and its possible neuroimaging biomarkers; therefore, we have conducted a study to further understand BPSD with the help of neuroimaging correlates.

To study the correlation between BPSD with white matter changes on neuroimaging in Alzheimer’s dementia.

To study the sociodemographic factors and BPSD in Alzheimer’s dementia.

This is a cross-sectional study conducted in the outpatient facility of tertiary care private hospital at Hyderabad, India. Thirty subjects who fulfilled the inclusion criteria were enrolled for the study. Informed consent was obtained from each participant, and if some participant lacked capacity for consent, consent was obtained from the nominated representative/first-degree relative of the patient.

All subjects underwent routine investigations, neurocognitive assessment, and magnetic resonance imaging (MRI) brain dementia protocol and the required study parameters were obtained. The data were collected after approval from the ethics review committee board. The participants were compared on sociodemographic characteristics, performance on various neuropsychological tests, and neuroimaging scores. Statistically analysis was performed using the Statistical Package for the Social Sciences software version 16.0 (IBM Corp., Armonk, New York, USA). The data were analyzed using nonparametric correlation analysis. The data were screened for outliers. The correlation coefficient ranged from −1 to 1 and was tested for significance. If the p value is less than 0.05, correlation was considered as significant and two variables were said to be linearly correlated.

Tools used in the study:

In all, 7 patients belonged to the upper class, 22 to middle class, and 1 to lower class, according to Kuppuswamy and Prasad socioeconomic scale (Table 3). Twenty-three patients were residents of urban areas and the rest living in rural areas (Table 4).

The percentage of various symptoms on NPI is mentioned in Table 6, with the highest number of patients having depression and only one patient showing elation. Hallucination was seen in 26% patients and only two patients showed disinhibition. The second most common symptom exhibited by the patients was irritability, with 20 patients showing the symptom.

The MRI of a 55-year male (Fig. 1) showed progressive cerebral atrophy over a period of 3–4 years. Patient had presented with BPSD which initially presented as depressive features progressing to apathy and unawareness during the course of follow-up of Alzheimer’s dementia.

Behavioral and psychological symptoms of dementia are commonly seen in neurocognitive illness. It is the most studied and found to be widely associated with Alzheimer’s dementia,4 and its etiopathogenesis is still poorly understood. Various studies have been conducted to study the commonly occurring symptoms of BPSD, their prevalence, and severity at different stages of dementia.1,2 However, not many studies have been conducted to assess the specific volumetric changes in brain and its association with frequency, severity, and pattern of BPSD. 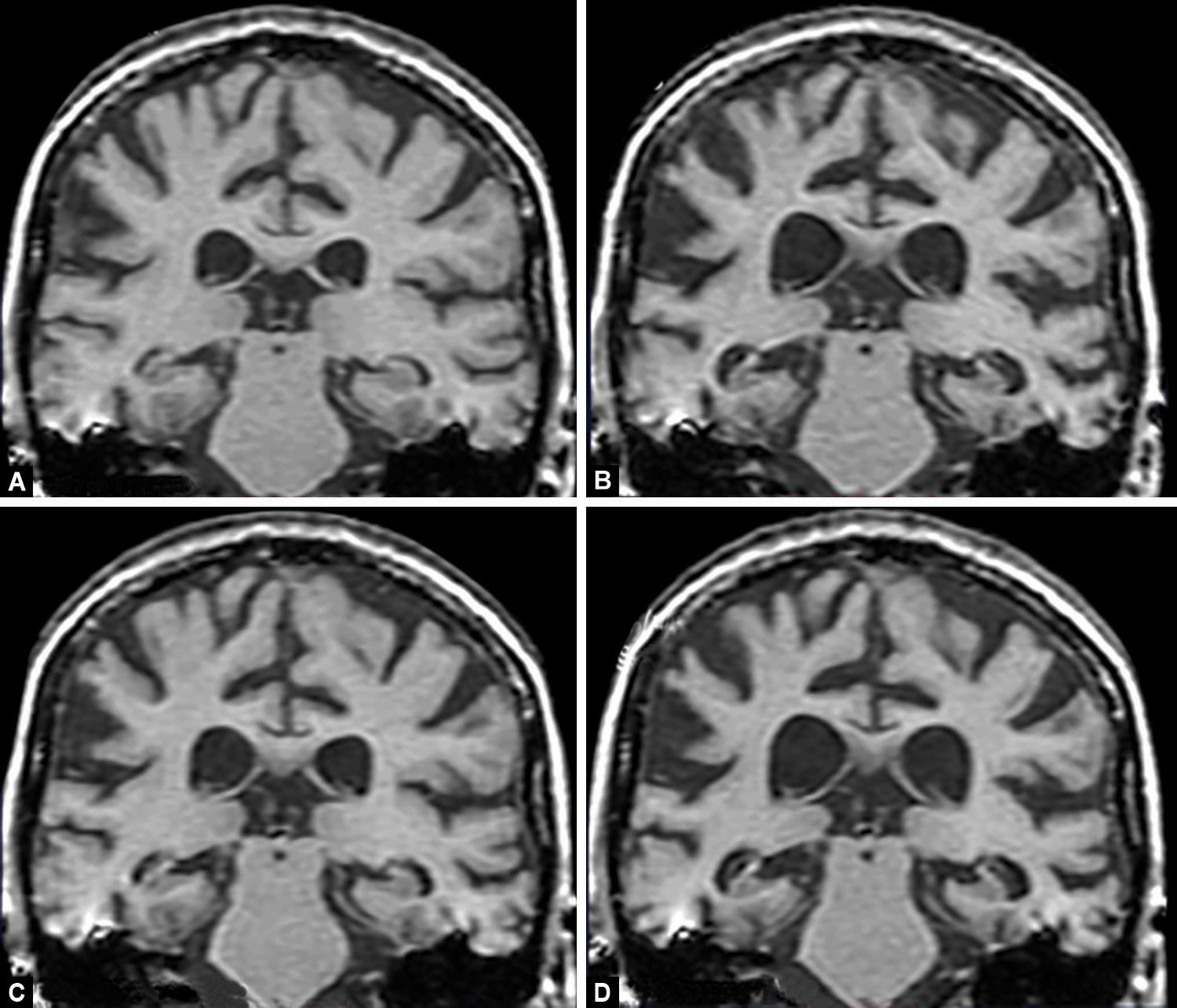 In a study by Holthoff et al.,5 based on MRI and fluorodeoxyglucose-positron emission tomography scan (FDG-PET), it was found that patients with apathy exhibited lower glucose metabolism in the left orbitofrontal cortex in comparison with other patients with no such symptoms [total study participants n = 53; apathy (n = 17), not apathy (n = 17), depressed (n = 10), not depressed (n = 10)]. Depressed group showed hypometabolism in the left prefrontal cortex and superior frontal cortex, when compared with subjects not depressed.

In our study, it was found that nearly all patients had some behavioral or psychological symptoms on NPI, of which depression was the most common, followed by nighttime behaviors and the least being elation/euphoria and disinhibition, respectively; however, most other studies found apathy and delusions as the most common symptoms in the early progressive course of AD.14 Also the corresponding MRI findings corroborated to the brain regions involved in the occurrence of these symptoms.15

The noteworthy finding here was correlation of neurocognitive assessment such as ACE-3 and CDR with neuroimaging scores such as Fazekas, GCA, MTA, and KOEDAM. It was particularly found that CDR scale correlated positively with Fazekas, GCA, and KOEDAM, which means as the performance on CDR deteriorates, the severity of neuroimaging scores increases. Similarly, ACE-3 had a positive correlation (p value of less than 0.05) with GCA score. These findings can give us the scope for future investigation in terms of the role of neuroimaging scores in predicting the development of BPSD symptoms and planning early targeted intervention in AD and BPSD.

Our study here in concordance with other studies worldwide gives a clue about the role of neuroimaging biomarkers in understanding BPSD in terms of its neuroimaging correlates and builds the scope of future studies in this domain.15 The study sheds light on common presentation of BPSD which adds to our knowledge in clinical assessment of AD patients. Finally, it also adds to our understanding of the role of sociodemographic factors in predicting the at risk population.

The BPSD in Alzheimer’s dementia still has a lacunae in our understanding of its definite etiopathogenesis; and thus, there is a barrier to predicting its course in disease and planning definite intervention. A worldwide more comprehensive prospective large-scale studies of neurobiomarkers might be a breakthrough and in the future might help us in improving our understanding of the course of the disease progression.

Limitations of our study: